Dell launched a slim and portable line in its entry-level business range with the Vostro V It's also supposed to convince in terms of design.

A few modifications have also been made on the case. Our comprehensive review now follows the preview. Slight modifications have been made to the case and completely renewed inside. Thanks to the latest Sandy Bridge processors, the Vostro V is now to be equal to 14 and 15 inch office computers in terms of performance. However, this also increases power consumption, which Dell henceforth wants to master with a replaceable 6 cell battery. It protrudes a bit out of the case and elevates the laptop in the rear by about one centimeter. Case Looking at the mentioned case size, you'll hardly find any noteworthy changes.

Merely the case's depth has increased by 8 millimeters according to the specs. But the naked eye won't really discern that.

Dell states the laptop's maximum height to be 21 millimeters. That's not quite right since the battery stands out by about 10 millimeters on the notebook's bottom in that area. This doesn't have a significant impact when used on the desk and the base unit's bottom might even be able to discharge waste air even better. However, you have to come to terms with the bulging battery on your lap in mobile use. An even bottom would have definitely been advantageous. The Vostro V almost looks exactly like its predecessor.

But the Vostro V can't only score with its looks and feel, the stability also benefits from the surrounding metal parts. Both the display lid and the base unit's bottom cope well with selective pressure. 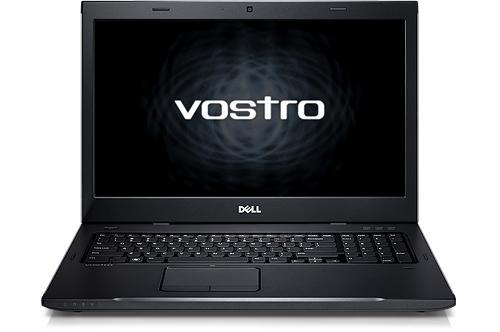 Possible warping is kept within limits on both parts. However, the Vostro has to admit clear defeat, for example, in face of the Apple MacBook Air 13 that was also in our office at the time of the review - and that although the Air is only half as thick as the Vostro. The opening mechanism has basically been maintained. So, the hinges are mounted in the area behind the display where the case is elevated. Consequently, the display is moved closer to the user than is the case in conventional solutions.

Although the metal hinges make a solid impression, they can't prevent the display from teetering quite intensely. This was noticed quite disagreeably in the test especially during use on unsteady surfaces, for example directly on the lap. Finally, we'd like to deal with the case's weight. The new Vostro V's weight adds up to grams with the 6 cell battery that belongs to the standard configuration in Europe. The Vostro V was therefore about grams lighter with grams. When we again look Dell Vostro V131 Notebook Intel Turbo Boost Monitor the horizon, we'll for example see Samsung's premium 13 inch X3Awith 1. First Dell's standard Vostro is not only thicker up to 29 millimetersbut is also noticeably heavier than the V with 2. Connectivity Dell has made a not insignificant improvement in terms of interfaces.

The V's three USB 2. There is no docking port. There have been quite a few changes made in the port arrangement due to the battery.

With exception of the power socket and Kensington slot, all ports have been moved to the lateral edges and remain agreeably in the back area. This should keep the obstructions caused by connected cables within limits.

The card reader moves from the left to the right and there is still no optical drive. Audio, 2 USB 3. The integrated UMTS modem costs about euros extra. While the slot Dell Vostro V131 Notebook Intel Turbo Boost Monitor the corresponding SIM card was still easy to access on the Vostro V's front, it had to move for the refresh. The Vostro V also supplies a range of security features as an entry-level business device. The fingerprint reader included in the standard scope of delivery to name an example. But many offered data security services Trendmicro Worry Free, DataSafe Online Backup and support services ProSupport up to three years with onsite service on the next business day, optional accidental damage protection.

The 3 year onsite service makes a difference of euros net in comparison to the 12 month standard warranty. Input Devices Keyboard Not much has changed in regard to the installed keyboard's layout. But a lot in terms of looks.

Dell now also turns to the chiclet design in the Vostro V Thus, the keys are inserted singly into the case. Free Download Dell Vostro V Notebook Intel Turbo Boost Monitor Utility A00 (Other Drivers & Tools). This package provides the Intel Turbo Boost Technology Monitor Software Application and is supported on Inspiron / and Vostro Notebook that.